Back to my recent obsession with the mid-80s! This time I want to talk about a mini-wave of French pop bands who had some minor yet excellent hits around 1985-86 then disappeared. Let's start with the bigger of the three, Taxi Girl, who actually had a very big hit in 1980 with "Cherchez le Garcon":

But this blog is about obscure stuff and we're supposed to be talking about the mid-80s today, so I want to point to the band's last single released in 1985, "Aussi belle qu'une balle", that didn't have the same success as "Cherchez le garcon" yet is just as great (and bonus point if you can name the actresses in the background photos) :

What happened to them? Daniel Darc (the singer) went solo and has become somewhat of a cult pop figure in France, and Mirwais (the guitarist and co-composer) went on to become Madonna's hot-shot producer!

Another great band was Gamine, who managed a couple of hit singles and released a couple of albums. Amateurs of French pop probably remember "Voila les anges" which could even be heard on dance floors at the time, but I want to single out "Le Voyage", which is truly a little pop marvel.

Doesn't this song make you want to fall in love with some unattainable woman?

Gamine was a champion of good pop taste, but the mistake they probably made was to sing their second album in English. By trying to go global they lost their local support and were soon forgotten. 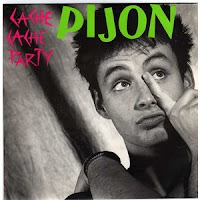 Let's finish off with the more obscure of the three, a band called Pijon. I think this song deserved much more success (despite its video):

Jerome Pigeon, the singer, tried a solo career, but wasn't successful either...

Other French pop one-hit wonders of the mid-80s: Les Innocents, Les Ablettes, Les Calamites, Luna Parker, etc. Check them out! These bands may not have had much staying power, but they probably planted the seeds of bigger things to come: Noir Desir, Mano Negra, Negresses Vertes, all bands with a harder edge and who persisted to sing in French and still managed to have some success beyond French borders.
Posted by DrEasy at 1:19 AM No comments: