So lately I've been reminiscing of the years 1985-86, trying to think of pop songs that I really liked back then and that still sound good to me now. It just seems to me that 1984 was a better year for pop. Anyway, one song that definitely makes the grade is Thought I'd Never See You Again by a British band called Working Week. It's just the perfect mix of wistful pop and jazz, with some wonderful female vocals:

It's actually quite interesting how many 80s pop bands used to include jazz influences in their music at the time. Remember Matt Bianco, Joe Jackson, Sade, Hong-Kong Syndikat? (Well, maybe you don't remember the latter, but then check them out, or maybe it's a topic for another blog post?) So after mentally sending a thousand thanks to YouTube (and whoever shared that song with the rest of us) for instantly playing that great yet relatively obscure song for me, I wanted to find out who Working Week were. According to their Wikipedia entry, they were formed by guitarist Simon Booth and saxophonist Larry Stabbins, with vocal contributions ranging from Julie Tippets (better known as 60s hippie Julie Driscoll) to good old Robert Wyatt and then up-and-coming singer Tracey Thorn (Everything But The Girl!). On the song above though, it is a certain Julie Roberts singing.

Still according to the Wikipedia article, Booth and Stabbins were previously in a band called Weekend, which had apparently had great critical acclaim. Naturally, I had to check them out. Here is one of the many gems I found (listen to the very end: the initial gentle bossa nova breaks out into full blown samba): 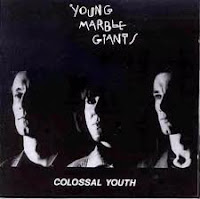 "But... but...", the diligent and knowledgeable EasyTV viewer interjects, "the vocals sound familiar!" Right you are. It turns out the singer is Allison Statton, mostly known as a the voice of Young Marble Giants, whose minimalist and spooky sound combined with the plain female vocals was really fresh when it came out in the early 80s, and it hasn't aged one bit to this day. I used to use one of their songs as the intro to my little radio show back in the day. Here's a little sample, a song called N.I.T.A., from their Colossal Youth album:

After a couple of albums, Young Marble Giants split. So now we know where Statton ended up (she had further musical adventures, including a partnership in the late 80s with guitarist Ian Devine, in a band aptly named Devine & Statton). As for Stuart Moxham, he formed the Gist, whose song 'Love At First Sight' is better known as "Cafe de Flore" as adapted in French by Etienne Daho. But here's the original version (and the superior one, in my opinion):

So a quick lookup of band Working Week yielded all these other interesting names and bands. Who knew?
Posted by DrEasy at 7:19 PM 1 comment: