I think from time to time I'll focus on an artist who just hasn't got the attention or success he or she deserves. Today we have the case of an 80s British songer-songwriter who was bigger in France than in England: Bill Pritchard. I'd say his influences include the Smiths and the Go-Betweens, i.e. the melodic romantic jangly kind of pop. He should probably thank Etienne Daho and Daniel Darc, French pop-stars with good taste who collaborated with him and promoted him in France. He often refers to his French affinities in his songs. I don't anything about him other than what his Wikipedia entry says, so I'll just leave you with these little gems:

The first one is Romance Sans Paroles, a song that Stephin Merritt probably has never heard but that he would approve of.

This one, Tommy and Co, was produced by Etienne Daho, and somehow I can almost hear his presence in the way Bill sings the "Tommy and co" line in the chorus.

In 1991 he released Jolie, an album produced by Ian Broudie (Big in Japan, Lightning Seeds). Again, the influence of the producer can clearly be heard:

And to finish, here's a more "experimental" one, more synthetic, from an obscure compilation entitled Future Tense. Haunting stuff.

Check out the YouTube comments if you can, you'll find that many remember him as their French high school teacher.
Posted by DrEasy at 11:01 PM No comments: 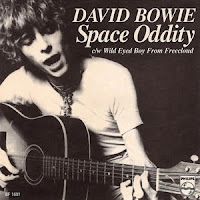 I suppose most EasyTV viewers know Major Tom, the character David Bowie invented for one of his first hit singles, Space Oddity. The song tells the story of poor Major Tom, lost in space after leaving his capsule. It was influenced by Kubrick's "2001: A Space Odyssey", and the song title can therefore be viewed as a pun on the movie title. Well, one odd thing about this song is that there's two official videos circulating for that song. The reason being that the song was initially included in an early album that wasn't very successful. Then the song was re-recorded (and that's the version we know) and played during the moon landing on English TV. That's when the song took off, if you pardon the pun. Americans didn't care much for the song initially, but a re-release a few years later also eventually broke through there (tedious details of releases and re-releases courtesy of Wikipedia). Anyway, first we have the recording we all know:

But there is an earlier video, recorded when the song was initially released as part of a promotional film called Love You Till Tuesday. The song reflects Bowie's earlier sound and folk influences. The video is pretty funny, in my opinion:

Major Tom resurfaces in 1980, in Ashes to Ashes, Bowie's fantastic hit single off his Scary Monsters album. This is where Bowie admits that "Major Tom's a junkie", and that his take off, floating and loss in Space Oddity were all a metaphor for heroin consumption. The video made a big impression on me at the time:

And then, something peculiar happens. Major Tom ditches heroin for something more conducive to dancing. Peter Schilling (who is indeed related to Curt Schilling the baseball pitcher, by the way), releases a electro-pop song called "Major Tom", and he tells us Major Tom, contrary to popular belief, is alive and coming home! It's a miracle, but based on the video I wonder if he landed ok:

Major Tom's resurrection and his new taste for dancing were regrettable. Bowie recycled him one more time for "Hallo Spaceboy", from his 1995 Outside album, and Pet Shop Boys took care of the dance remix (Neil Tennant can be heard on the chorus).

Here's the official video of the remix, in case you care:

If you're really curious, here's the original version (i.e. non remix) from the album:

But I want to leave you on a good note, so here's a haunting take on Space Oddity by a kid's choir, as part of the Langley Schools Music Project, recorded in 1976 but mostly known due to its re-release in 2001.

Big thanks to The Straight Dope for some valuable information.
Posted by DrEasy at 1:27 PM No comments: 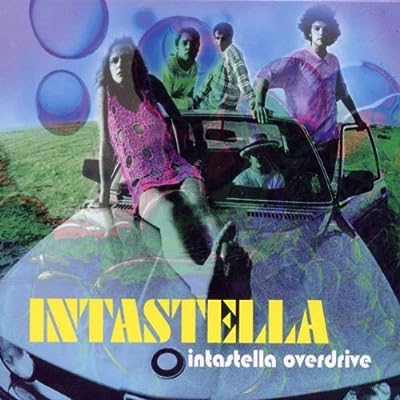 The Manchester scene in the late 80s and early 90s created perhaps the only kind of music that really makes me want to dance. Fuelled by acid and ecstasy, the blend of new beats with 60s influences and psychedelic guitar effects was just irresistible. Now I'm pretty sure most EasyTV viewers are familiar with names like Happy Mondays, Inspiral Carpets and Charlatans, so today we're going to take a look at some more minor bands who had some accordingly minor hits.

Intastella was an oddity of Madchester in that it had a female lead singer (I can only think of Saint Etienne as the other prominent example). It didn't hurt that the singer was quite attractive, and so maybe Intastella should have had bigger success than what they had. Truth be told though, I just don't think they had a good enough line-up of songs, and there just were too many better bands around at that time. Nevertheless, let's have a peek at one of their better singles, which I think is still pretty groovy:

Maybe the song that typified best the Madchester sound and spirit was this hit by Northside. If you don't dance to this, you must be dead:

It's songs like the above that made everyone wish they could "take a trip" to the Hacienda club and be part of the craziness of the nascent rave culture. Living outside of England, it was difficult to find similar scenes or at least hear the hits on the radio, as consolidation and extreme commercialization were taking care of the nice diversity of musical offerings that could once be enjoyed through "free" FM radio in the early to mid-80s.

Luckily we now have the internet and we can retroactively and nostalgically discover songs such as this one by World of Twist:

The guy sings very much like Bobby Gillespie from Primal Scream, I wonder who copied who?

I have made myself a nice little compilation of hit singles from that era, and we should one day throw a party somewhere and dance to this stuff. Who's in?
Posted by DrEasy at 8:26 PM No comments: